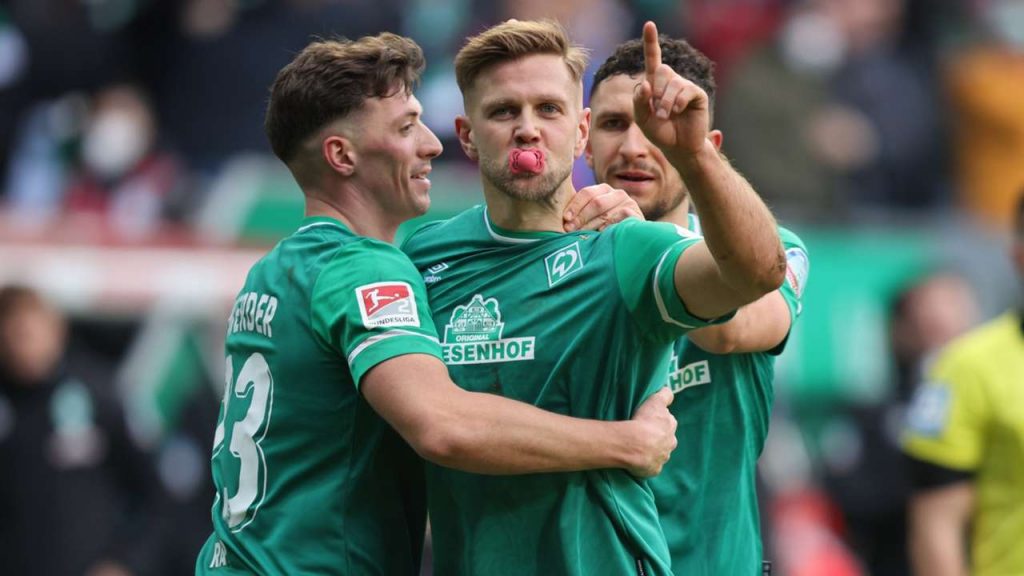 The round of midweek fixtures saw a large number of goals including some of the best strikes of the season, and now the 2022/23 Bundesliga heads into Matchday 15 at the end of this week. It is the final round before the FIFA World Cup and the winter-break and we bring you the best Bundesliga betting tips for each match.

Reigning champions Bayern München had reassumed top-spot in the Bundesliga last week and it further consolidated its position on Matchday 14. Early pace-setters Union Berlin have risen back to 2nd place but it is presently 4 points behind the leaders while Freiburg slipped down to 3rd spot albeit only on goal-difference. Meanwhile UEFA Europa League holders Eintracht Frankfurt have made their way back into the top-4 after proving to be the most consistent team over the past couple of months. RB Leipzig and Borussia Dortmund currently occupy 5th and 6th positions, respectively.

At the opposite end of the table, Schalke 04 collected its first points under new manager Thomas Reis but it still remains rock-bottom of the Bundesliga as Bochum also picked up a victory to stay a point ahead in 17th position. Stuttgart was able to get out of the drop-zone at the expense of Hertha Berlin and replace the latter in 15th spot. Bayer Leverkusen got a crucial win to move ahead of 14th placed Augsburg on goal-difference. 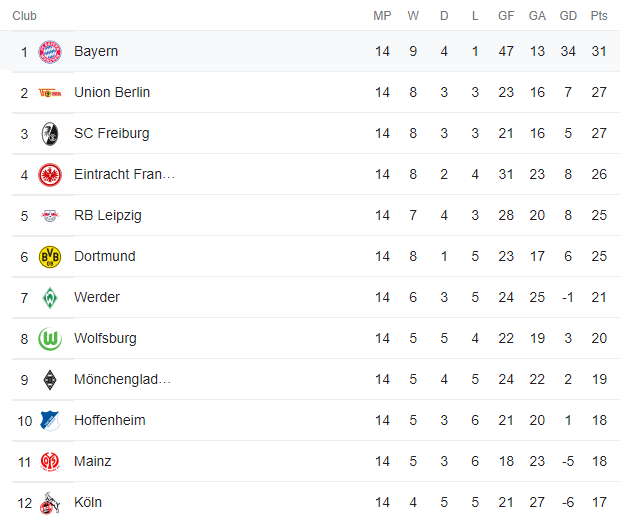 Borussia M’gladbach’s struggles on the road continued after it losing 2-1 at Bochum on Matchday 14 which has dropped the club down to 9th spot in the Bundesliga. Meanwhile, Borussia Dortmund saw its 3-game winning-streak come to an end as it fell down to 6th place with the disappointing 2-0 defeat at Wolfsburg on Tuesday night.

According to our Bundesliga betting tips experts, the 2.05 line on Under 1.5 goals for the visiting-team is the safest pick here. While M’gladbach is unlikely to get a clean-sheet after failing to get one in any of its previous 7 league-fixtures, it has only conceded 8 goals in the 7 home-games. Besides, Dortmund has managed just 8 goals in 7 away-games while it has failed to score in 3 of its last 5 league-matches on the road.

At the same time, the 2.10 line on Over 1.5 goals for the home-team also looks a pretty good option. M’gladbach is averaging more than 2 goals per game on home-turf and has netted 12 times in the last 4 Bundesliga matches at Borussia-Park. Moreover, Dortmund has allowed at least 2 goals in 3 of its previous 4 league-matches on the road.

2nd Half Result: M’gladbach at 3.10 on Sportaza

Augsburg dropped a notch down to 14th spot in spite of delivering a gutsy performance to earn itself a point from the 2-2 draw at Union Berlin on Matchday 14. Bochum kept up its recent resurgence after securing its 3rd consecutive home-win by beating Borussia M’gladbach 2-1 which puts it just 3 points shy of safety in 17th position.

Favouring the home-side at 2.25 to take the Match Result appears to be the clearest choice in this clash for our Bundesliga betting tips experts. While home-form has been quite poor for Augsburg thus far, it should still be able notch a victory to end its current 6-game winless-run. Bochum is yet to collect a point on the road this season after losing all of its opening 7 league-matches on the road.

The 2.05 line on 2-3 in the Goal Range market also looks a good bet here. Augsburg has the worst scoring-record at home but has still netted 6 goals in its last 4 league-games at WWK Arena. Bochum has the worst defensive-record having conceded at least 3 times in each of the last 5 away-matches while it has only managed 4 goals on the road so far.

Hertha Berlin has been pushed back to the bottom-3 of the Bundesliga to 16th spot after conceding a last-minute goal in the 2-1 defeat at Stuttgart on Matchday 14. Köln is also in similarly jittery form over the past month but managed to stay in 12th spot after losing 1-2 at home to Bayer Leverkusen despite having the half-time lead.

For our Bundesliga betting tips experts, the 2.62 offering on Over 3.5 Total Goals is worth an attempt in this encounter. Hertha Berlin has not yet earned a clean-sheet at home this season but has still scored at least 2 goals in 4 of its last 5 league-games at the Olympiastadion. Köln has scored 10 times in 7 away-matches without a single clean-sheet on the road and has let in 12 goals in its last 3 games on the road.

Choosing the 2.33 price on the home-team to pick up the Match Result also seems a good notion. Hertha has shown fairly steady form at home despite managing to win only 1 out its 7 Bundesliga matches at the Olympiastadion. Köln has tasted 4 defeats in its previous 6 league-fixtures, including each of its previous 3 away-games.

Half Time/Full Time: Draw/Hertha Berlin at 5.75 on Sportaza

Bayer Leverkusen jumped up to 13th position after producing another rousing 2nd half display to come from behind and snatch a 1-2 win at Köln on Wednesday night. Stuttgart moved out from the drop-zone to 15th spot after scoring a last-minute goal to secure a 2-1 victory against Hertha Berlin for its 3rd straight home-win.

The 2.28 price on a home-win with over 2.5 Total goals is a fine choice here in the opinion of our Bundesliga betting tips experts. Leverkusen has seemingly turned a corner after notching successive league-wins for the first time this season besides scoring 11 times in the last 3 home-games. Stuttgart has lost each of its previous 3 away-fixtures while conceding at least 3 goals in each of those games.

Betting on the 2nd half to be the Highest Scoring Half for the home-team at odds of 2.20 is also a nice pick for this game. Bayer Leverkusen has scored 11 goals in the 2nd half of its last 6 Bundesliga matches. At the same time, Stuttgart has allowed the opposition to score at least 1 goal in 5 of the 6 away-matches this season.

Bayer Leverkusen 4-1 Stuttgart at 23.0 on Sportaza

With the 4-2 loss on the road at Eintracht Frankfurt on Wednesday night, Hoffenheim has slipped out from the top-half of the Bundesliga table to 10th position. Meanwhile Wolfsburg has broken into the top-half with its impressive 2-0 home-win over Borussia Dortmund in Matchday 14 lifting the club to 8th spot for the moment.

After much scrutiny, our Bundesliga betting tips experts have decided that the 2.28 line on Over 1.5 goals for the visiting-team is the standout choice for this clash. Hoffenheim is clearly struggling at the back and it has lost all its previous 3 home-games while conceding at least 2 goals in each defeat. On the other hand, Wolfsburg has looked a much-improved side up front having scored at least 2 goals in the last 5 matches.

Also, the 2.08 offer on the away-team to score the First Goal presents solid value here. The defensive problems of Hoffenheim are clearly illustrated by the fact that it has conceded the opening goal in 5 of its last 6 matches. Moreover, Wolfsburg has managed to open its account during the 1st half in each of the last 7 league-games.

Match Result: Wolfsburg at 3.10 on Sportaza

Hoffenheim 1-2 Wolfsburg at 11.0 on Sportaza

Werder Bremen was able to stay in 7th position of the Bundesliga table in spite of taking a 6-1 hammering at Bayern München on Matchday 14. RB Leipzig also remained 6th in the league-standings after snatching a 3-1 home-win over Freiburg on Wednesday evening to extend its unbeaten-run.

The 2.30 offer on the home-team to score the First Goal will be an astute choice in this fixture according to our Bundesliga betting tips experts. Werder Bremen is averaging nearly 2 goals per game at home and has scored the opening-goal in 4 of the 7 league-matches at the Weserstadion. Also, Leipzig has not yet earned a clean-sheet on the road as yet while it has conceded first in 5 of its 7 away-matches as well.

The 2.25 price on Christopher Nkunku in the Anytime Goal Scorer market also seems an absolute bargain here. Nkunku is the current top-scorer of the Bundesliga with 12 goals to his name and Frenchman is enjoying a brilliant spell for Leipzig having scored 7 times in his last 6 games in all competitions.

1st Half Result: Werder Bremen at 4.00 on Sportaza

While Schalke remains in 18th position, it managed to put an end to its 7-match losing-streak with a 1-0 victory against Mainz 05 on Matchday 14. Bayern München seems to have taken charge of the Bundesliga season after opening up a 4-point lead at the top of the Bundesliga with the 6-1 thrashing of Werder Bremen.

To our Bundesliga betting tips experts, the 2.10 line on the visiting-team to Win to Nil appears to be the most valuable pick in this fixture. Thus far, Schalke has tasted 4 defeats in the 7 Bundesliga matches at Veltins Arena while it has only scored 1 goal in the previous 3 home-games. On the other hand, Bayern has won each of the last 5 meetings with Schalke without conceding a single goal.

The 2.12 price on Jamal Musiala in the Anytime Goal Scorer market will also be a fine choice. Musiala is enjoying a major breakout season and he is the highest-scorer for his club and 3rd overall in the Bundesliga with 7 goals to his name. The 19 year old German international has scored a goal in each of past 4 league-appearances.

Mainz fell to its 3rd successive defeat after losing 1-0 on the road at Schalke on Matchday 14 which went down into 11th spot in the Bundesliga table. After getting through to the last-16 of the UEFA Champions League, Eintracht Frankfurt was able to break into the top-4 after securing a 4-2 victory at home to Hoffenheim.

With the attractive 2.62 price, backing the away-side to take the Match Result should be a good punt here in the view of our Bundesliga betting tips experts. Mainz has failed to show any real consistency this season and it has only managed 1 win from its 6 home-games. In contrast, Eintracht has been the most consistent team across the past couple of months and it has notched 4 wins from its 6 away-matches so far.

Taking the 2.10 line on Over 1.5 goals for the visiting-team will also be nice for this clash. Mainz is going through some severe issues defensively after letting in 10 goals in the last 3 league-matches. Eintracht is in a good position to exploit this weakness having already scored 2 or more goals in 4 of its 6 away-matches.

Eintracht Frankfurt to Score in Both Halves: Yes at 3.25 on Sportaza

Mainz 1-2 Eintracht Frankfurt at 9.60 on Sportaza

Freiburg had its 3-game winning-run cut short by the 3-1 loss at Leipzig on Wednesday night which dropped it down a notch to 3rd position in the league-standings. Therefore Union Berlin managed to replace them in 2nd spot of the Bundesliga table even though it was held to a 2-2 draw at home by Augsburg on Matchday 14.

As per our Bundesliga betting tips experts, the 2.40 offer on the home-team to keep a Clean Sheet presents the best pick for this encounter. Freiburg possesses the tightest defensive-record on home-turf and has earned 4 clean-sheets from the past 5 league-matches at Europa-Park Stadion. Union Berlin may average just over a goal per game on the road but has actually failed to score in 4 of its 7 away-matches this season.

In addition, the 2.12 price on the home-team to secure the Match Result also looks a fine bet here. Freiburg has a pretty solid home-record at the moment with 4 victories in its past 5 Bundesliga home-games. On the other hand, Union Berlin is having some serious problems on the road after going down to 3 losses in its last 4 away-games.

Freiburg Win to Nil: Yes at 3.20 on Sportaza

Half Time/Full Time: Draw/Freiburg at 5.0 on Sportaza